kw.media » Blog » How to use Social Media to grow your YouTube Channel

How to use Social Media to grow your YouTube Channel 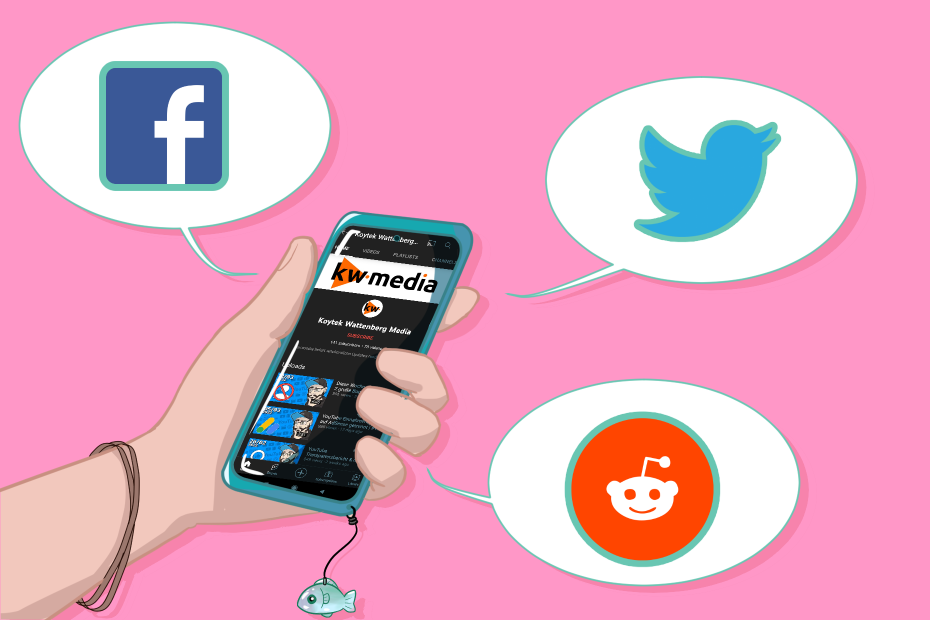 If wielded well, social media can be a powerful tool. It can reach new audiences, boost your old videos, and might even make your video go viral. But before we get ahead of ourselves, let’s first start with what doesn’t work. We’ll get to what works later, down to the strategy for each section.

Promoting your Videos in Reddit/Discord/Facebook Communities

As we’ve established above, you shouldn’t promote your videos in self-promotion communities. But where else should you? The answer is probably as simple as it is obvious: In communities that are about your content. If you make beauty content, share your video in beauty tips communities. Outdoor content might fit well in outdoor, nature and maybe even fitness communities, or communities about the place you visited.

Outside of being a great place to share content, these communities also are a place for you to find inspiration and collaboration partners. Maybe another person will talk about an insider tip, only known to locals. Maybe you’ll find people who do great text analyses, which you can use as basis for a video. And maybe it’ll just be a pleasant community to be around.

When looking for communities, you’ll find some with millions of members, all the way down to some with just dozens of members. Sharing in all of them is fair game. More members means more potential viewers, but it might also mean less focus and more competition. This means for example that if you share a video about a specific brand of shoes in a general shoe community and a community for just that brand, it may get way more views from the brand-specific one, even if the brand community is orders of magnitude smaller.

… but it’s not always so simple

So, assuming you have a video about a game, you might go for the subreddit and discord that is about the game – and quickly find your video get ignored, downvoted to hell, or worse, removed by a moderator. What happened? The problem is twofold:

On one hand, your video might be something the community sees every day. Especially in the gaming genre, chances are, if you’re doing any sort of video series of you playing one game, there’s dozens of others doing it, too. This makes your video rather redundant, and also not very interesting. This even can still be true if you only collect the highlights: In the grand scheme of things, your highlights may not be super interesting.

On the other hand, the audience you serve with your videos may be different from the community. For example, if you have a maths video that first talks about the basics necessary to understand it and only then has the grand reveal, you may alienate a community mostly consisting of maths professionals. Simply because it’s too simple.

I can’t really offer a solution to the first problem. If your content isn’t interesting to a community, there probably isn’t much you can do. Some content just isn’t super shareable, like personal vlogs. As an aside, this doesn’t necessarily mean that you should switch up the format. Hub content (or anything optimized primarily towards subscribers and seriality in the SEE-NTS model) is very useful to keep subscribers happy and turn subscribers into fans. You just won’t reach many new people with it.

For the second problem there is a solution though, which is applicable not only to communities, but social media in general.

Social media sites have recognized that images are better than links, so they automatically try to embed one when you share a link. But what’s better than still images? Moving images! This means that if you share your video on social media, you may want to use a short video clip or GIF from the video along with it.

As for what clip to share, there is a range of options:

(there’s another option, but before I get to that, let me first give you some context)

You probably know the rules to grow your YouTube channel: Post frequently, find your niche, optimize your content and so on. The very same rules apply to any social media. This is because these rules aren’t necessarily YouTube rules, they’re audience growth rules. You can even apply them to TV shows quite well! So of course, you can use them for your social media as well.

This also is where the point I left out earlier comes back into play:

Doing this would be a bad idea in the context of promoting your YouTube channel. You basically are just giving up views and ad revenue for what? Facebook likes? Well, yes! The point of doing this is to grow your social media presence, not just by posting companion pieces to your YouTube channel, but by letting it be valuable even to people who don’t follow you on YouTube.

And perhaps surprisingly, this isn’t a total waste of money. Your new followers might watch your future content, sure, but where this actually gets interesting is brand deals. If you have a million YouTube followers, but no real twitter/Facebook/Instagram presence, it tells brands that you might make good videos, but aren’t a good influencer. That is, a person who gets others to do (and buy) stuff. If you do have lots of followers and also a few viral posts you can point to, you can make increase the pay for brand deals significantly. Speaking of which, don’t undersell yourself! Just maybe use the heart of older videos that don’t get too many views anymore instead of always the latest.

I already touched on a few of them, but here’s some more for completeness sake. This section really is more “how to grow your twitter” or whatever than really YouTube-related, but if you’re unfamiliar with it, it might be useful:

Grow your Brand, not just your Channel

If you employ all the strategies listed above, you’re probably doing that already. The point is, a strong brand across various social media is going to let you reach new audiences, it will get you better sponsorship deals, it will give you a backup net should any one of your social media accounts get terminated, and yes, it’ll help you grow your YouTube channel, too.

It also is a lot of work. So make sure you don’t spread yourself too thinly by trying to run all the social media at once. If necessary, you can hire some additional folks so you don’t have to do everything from pre-production to via production, analytics and marketing to social media management yourself. And while we’re not social media managers, we can help you in other ways. You can consult us for content strategy, help with sponsorship deals, analyzing your channel, and yes, for your social media strategy. Though I suppose if you’ve read this far, you kinda know in general what we’d tell you for your channel specifically. Welp. Maybe we can help you in other ways, too?

This website uses cookies to improve your experience while you navigate through the website. Out of these cookies, the cookies that are categorized as necessary are stored on your browser as they are essential for the working of basic functionalities of the website. We also use third-party cookies that help us analyze and understand how you use this website. These cookies will be stored in your browser only with your consent. You also have the option to opt-out of these cookies. But opting out of some of these cookies may have an effect on your browsing experience.
Necessary Always Enabled
Necessary cookies are absolutely essential for the website to function properly. This category only includes cookies that ensures basic functionalities and security features of the website. These cookies do not store any personal information.
Non-necessary
Any cookies that may not be particularly necessary for the website to function and is used specifically to collect user personal data via analytics, ads, other embedded contents are termed as non-necessary cookies. It is mandatory to procure user consent prior to running these cookies on your website.
SAVE & ACCEPT